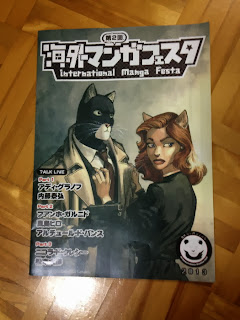 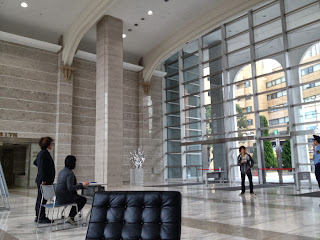 Checking into the seminar.

The day before the main event, there was a seminar at the Nihon Kogauin college about mainstream manga in Japan. There was an interpreter translating the event into English and Japanese. I thought the seminar was quite interesting.

Some notes:
* Two veteran manga artists (who make up the pen name Akira Himekawa) talked about their production process. In their case, this involves drawing out nemu (rough storyboards) until the editors of the magazine or whoever approves them, sketching out the pages, outsourcing the backgrounds via internet to an artist in Germany, the manga artists finish inking the characters, then combining the background and characters, adding ziptones digitally and polishing.

I didn't realize we were outsourcing manga backgrounds to artists in Germany now.
(It sounds like there are production houses in Japan as well for backgrounds, etc.)

* Davi Nathanael, A 27 year old (or so) who hails from Germany, talked about how he moved to Japan when he was 19 with dreams of becoming a manga artist. After trying to get his work published and having trouble, he enrolling in the college (where the seminar was held) and debuted with a series about his life in Japan (called "Boku wa Tokyo de real").

* An editor for some magazines talked about the role of editors in manga, which seems to be much more involved then in other countries. He showed a picture of a popular anime he was supervising, one of those promo pictures of a young woman in an odd outfit in an odd pose. Not odd as in Cirque du Soleil interesting-odd, but as in, a promo picture vaguely insulting to women and which makes me look for another anime to watch. Anyway.

Some of the things the editor said included, "The editor's role is to help make your work popular. Write with your editor in mind! We are your first eyes. Learn to make short self-contained stories, under 30 pages, when you are trying to debut. We want to make an agreeable environment for you to work in. We will take care of your finances and fan letters.  We will find out what is popular and what sells, because you are busy. There is no set way for an author to work or for an editor to work. Also take only half my words to be true."

I have read one the magazines the editor is involved with. Listening to his presentation, I had several "ah, so that's why..." moments. But to be fair, I thought the bit about learning to make short stories was good, and he wrapped up his advice rather interestingly.

The editor's advice reminded me a little of a three-act screenwriting professor I had college. He was a a former screenplay reader and he gave advice such as, "If a joke or something is not working in the script, cut it out, the script will be stronger and you might see a better place for the joke later. Write with the screenplay reader in mind, because that is the gate-keeper for scripts in the movie industry. Don't break genre!" (The first bit of advice seemed all right. The rest probably helped push me towards independent arts.)

Note: In contrast, my first screenwriting professor was a woman who makes her own independent movies, and she gave advice such as: "Make sure you really care about your characters, enough that you are willing to wake up at 4am for them. Because you will, at one point, when you are shooting your movie." I have always thought this was very relevant (for many projects), since then.

After the seminar, I also stopped by a SCBWI (Society of Children's Book Writers and Illustrators) critique group.


Anyway, on to the festival the next day -- 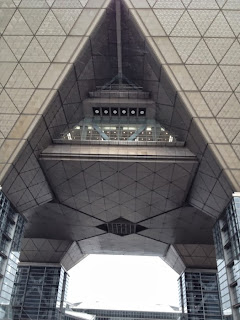 Tokyo Big Sight.
I think it looks a little menacing. 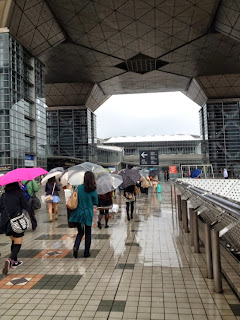 The festival commenced in the middle of a hurricane. Unlike these well-prepared people, I didn't have an umbrella, so I quickly felt glad towards that giant menacing roof thing for keeping the rain off me.

The exhibition building is enormous! They have moving sidewalks installed just to ferry people faster from one hall to another. (I think the Hynes convention center is swallowed by this place, just as a comparison for anyone from Boston.) 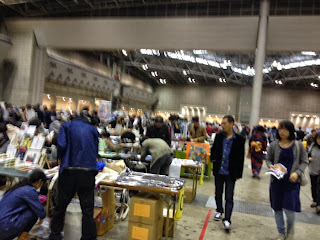 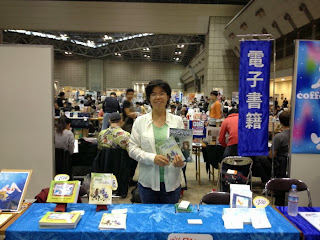 I pose with books I am selling plus the Kaigai Manga fest booklet. (You can purchase my books here and here.) I had English-language books as well as one minicomic I translated and re-printed, and I sold a few copies.

I should explain that the festival was part of a larger comics festival called Comitia, so the background is all that crowd. There were about 50 artists involved in the International Manga festival part, from the US, Phillipines, Bulgaria, France and elsewhere, with maybe 42 exhibitors in the artist alley and other artists involved in talks. 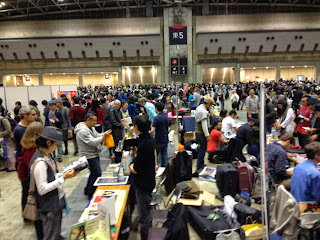 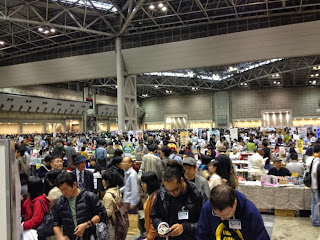 Above: more views of the event. Also in the front, the staff of Deconstructing Comics Podcast, who interviewed me.

This is Comitia #106. I guess the event happens a few times a year in Tokyo and larger cities in Japan, and it is focused on independent non-fandom-works. (There is no one in costume wandering around.) It's a bit like SPX, APE or MOCCA, although I think this is about two or three MOCCA crowds. The entrance fee for Comitia is 1000 yen (10 dollars). 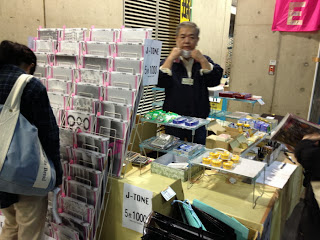 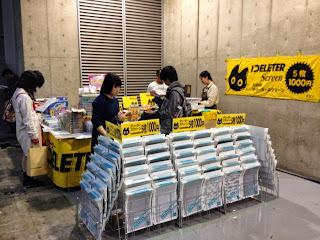 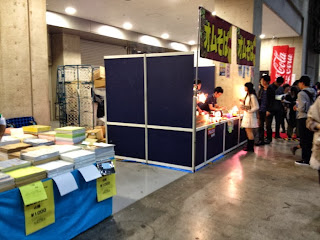 Above: vendors selling manga ziptones and general supplies. There is also a food stall. This seems like a pretty good idea. Do US comics fests have these? If they don't, I think they should. But instead of greasy event food, I think there should be, say, farmers markets selling local apples.

(Actually, this would inadvertently happened when I took part in indie comic tables at art festivals or farmers markets. I have to say it was great, picking up fresh apples and also comics! I very much think other comics festivals should also have at least one vendor selling fresh local produce that you can eat on the spot.)

Anwyay, here's another cool thing, below -- 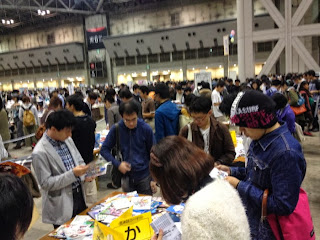 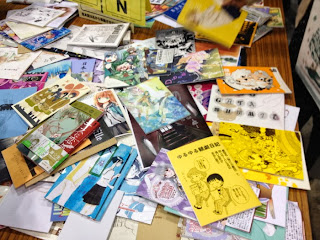 This is an area where you can read samples of the comics being sold. The area was chained off, and at least one staff member was standing on a chair and keeping watch. There are different tables; table N, for instance, has books from Row N. I thought this was a neat idea, and I thought it might be neat for shows in the US too.

I have to point out, the books generally look glossy and put-together. In the shows in the US I went to and for indie comics in general, I feel like the trademark is the photocopied-and-stapled book. (Did I go to smaller shows?) Do people in Japan (or at least Tokyo) have more access to small-press options? Has the tradition has been around longer and there are more printing options/methods developed? Or, US indie comics grew out of a DIY/Zine tradition and even now there is a definite "craft" feel to books at indie comics shows? Pop-culturalists are welcome to puzzle this out.

I should note that many of my favorite minicomics I have picked up in US shows do happen to be folded-and-stapled books. Perhaps that was the reason why, faced with this large sea of glossy comics, I started vaguely hunting for the photocopied-and-stapled books. 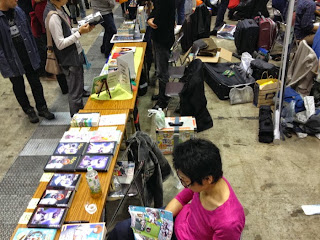 Above, my neighbor Nao Yazawa, representing Coffee Party. She was very chill and fun. She has been drawing manga for 20 years and is currently drawing a series called "Moon and Blood" for a publisher in the US. "The publishers asked me to draw vampires," she says, possibly with a slight shrug. "They said, they are popular right now in the US." 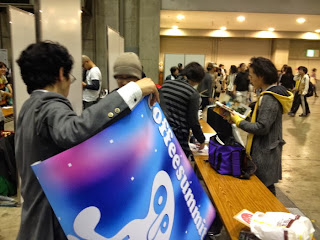 My other neighbors, Coffeesummit. Probably a coincidence on the names Coffeesummit and Coffee Party and being put nearly next to each other, we agree. Maybe. Anyway, Coffeesummit is digitally distributing a fairly indie-ish manga (I think) called "The Data Tower" on Kindle (in English and Japanese). 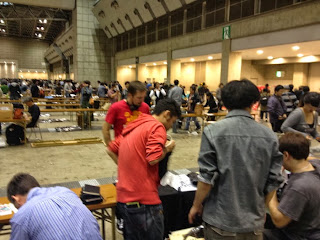 At the end of the day, the manga fest fest finished and people begin to pack up. 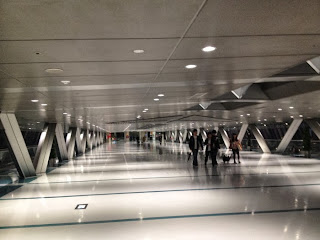 Then we boarded a space ship.

Actually, this was just the deserted hallways of the building. But you saw what Tokyo Big Sight looks like from the outside. What else kind of hallways could one expect?

On to the after party. 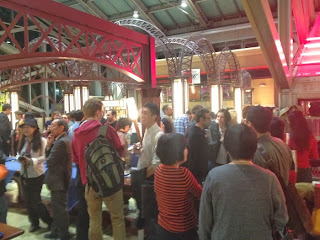 I met a publisher from Finland named Kimmo Ojuva, who said that Japanese manga (and possibly Japanese media in general?) is becoming very popular in Europe right now. Apparently, part of this is because people see it as a kind of counter-culture to US Hollywood movies. I think, nowadays, mainstream Japanese manga is pretty formula'd and editorially leashed as much as Hollywood, but this is a curious topic I would like to know more about.

I also met TCAF (Toronto Comics Arts Festival) organizers, OtakuThon (Toronto anime convention) organizers, translators from Italy, and artists from France, US and other countries who work in Japan now.

At the event in general, I met about four or five people who were JET program Alumni. The translator for the manga seminar turned out to be a former CIR. David Namisato, who writes "Life after the BOE" (comics about JET) was also at the event. (He is actually why I even know about the event, as he wrote an article mentioning the Kaigai Manga Fest in a JET-related publication.) Other folks included cartoonists Graeme McNee and Ryan Cecil Smith. 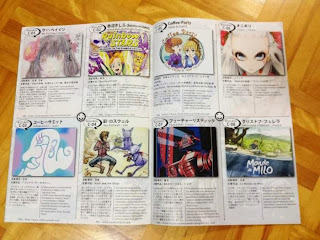 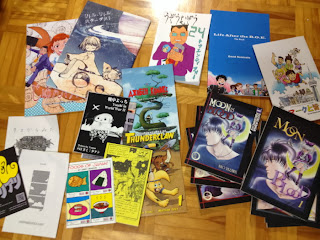 Books from the event.

Aya
I am in the US, probably on the east coast somewhere! (I am working field jobs and travel a lot.) Before that, I was in Japan, and before that I was living in Boston.